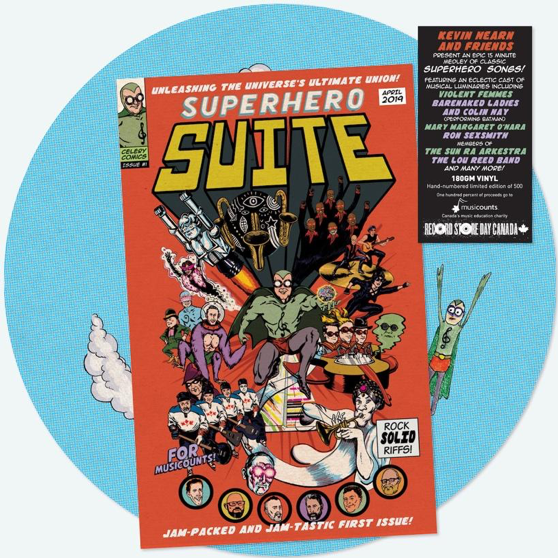 Award-winning multi-instrumentalist Kevin Hearn is partnering with Record Store Day Canada in support of MusiCounts on Saturday, April 13, 2019 with an exclusive EP titled Kevin Hearn and Friends Present: The Superhero Suite. The special edition 12” EP on 180g clear vinyl is limited to a hand-numbered run of 500 and will be available only at participating record stores listed HERE. Kevin Hearn and Friends Present: The Superhero Suite is a wild medley of vintage superhero-related songs, including iconic music from TV and film running the gamut from the classic Batman theme to the 1978 soundtrack of Superman. This one-of-a-kind record features a marvelous cast of eclectic heroes performing songs originally done by the Beach Boys, Flaming Lips, Queen and Black Sabbath. The musical luminaries include Ron Sexsmith, Michael Ray of the Sun Ra Arkestra, Carole Pope, Mary Margaret O’Hara, Alan Doyle, The Persuasions and more. One noteworthy highlight is Violent Femmes, Barenaked Ladies and Colin Hay joining forces for the theme song from TV's Batman. These kaleidoscopic sixteen minutes are a white-knuckle joyride that fly byin no time and the unique, fun-filled packaging includes an exclusive picture disc featuring artwork from Hearn as well as a collectible 10-page colour comic book with artwork illustrated by Hearn, Harland Williams, and Lauchie Reid.

Just like Superheroes, music saves lives and Canada’s music education charity MusiCounts recognizes that an education without music is empty. Kevin Hearn and Friends Present: The Superhero Suite will retail for $15 with all proceeds going to MusiCounts to help in the fight for a fulfilling future for children and youth across Canada. A school that has received support from MusiCounts was the setting for a promo video voiced by Kiefer Sutherland and featuring some of Canada’s diverse talent including Barenaked Ladies all performing the “Batman” theme. Watch HERE.

Says Hearn, “This project was a fun and epic way to make music with friends, all in the name of a good cause. Music is a beautiful, universal language that can change lives. It’s powerful and healing. Every child should have the opportunity to explore, learn, and make music.” See below for a full list of artist features and track list.

1. “Heroes and Villains” – The Persuasions

4. “Waiting For A Superman” – The Rheostatics

"Thank you to Kevin Hearn and friends for creating the amazing limited Record Store Day Canada release The Superhero Suite, and donating proceeds to MusiCounts," said Kristy Fletcher, Executive Director, MusiCounts. "We're proud to partner with Record Store Day Canada, and with funds raised through this initiative more kids across Canada will experience the transformational benefits of music."

Hearn may be best known as the multi-instrumentalist from Barenaked Ladies, whom he has played with since 1995. One of the most respected Toronto musicians of the past 25 years, Hearn’s solo albums always attract brilliant collaborators includingsinger/songwriters Ron Sexsmith and Dan Hill, drummer Rob Kloet (the Nits), producer Gavin Brown (Metric, Tragically Hip, Sarah Harmer), and one of Hearn’s closest musical relationships, the late, great Lou Reed, for whom Hearn acted as keyboardist and touring musical director from 2007 up until his passing in 2013. In 2018, Kevin was inducted into the Canadian Music Hall of Fame alongside Barenaked Ladies.

Record Store Day is a day that celebrates independent record stores all over the world with parties, in-store performances and special releases. It’s a day that spans genres and unites music lovers of all ages. There’s a palpable sense of camaraderie in those early morning lines, and an air of anxious excitement as fans gather to celebrate the place where they might be walking out with the record they came in for, and maybe with something totally new, too.

About MusiCounts
MusiCounts, Canada's music education charity associated with CARAS and the JUNO Awards, is keeping music alive across Canada by putting musical instruments into the hands of children that need them most. MusiCounts' mission is to ensure that children and youth in Canada have access to music programs through their schools and communities. MusiCounts celebrates musical excellence and achieves its mission through its Band Aid Program, the MusiCounts TD Community Music Program, the MusiCounts Teacher of the Year Award, MusiCounts Inspired Minds Ambassador Award, Scholarships and other music education initiatives. MusiCounts is funded by many of Canada's most dedicated individuals, events, and corporate citizens. Since 1997 MusiCounts has awarded nearly $12,000,000 in support of music education in Canada. These funds have benefitted 1,200 schools and communities, supported over 350 post-secondary music program graduates, and honoured 13 extraordinary music teachers and two MusiCounts ambassadors.www.musicounts.ca